– consultation and encouragement of property owners aiming for relevant historic buildings ‘and their environment upgrade;

“Community Capacity Building“(CCB) was backed by United Nations Development Programme and UNESCO World Heritage Centre at its start in 1999-2000. Additional tasks of CCB was stimulation of the establishment of Home Owners associations in the Old Town. Number of educational publications about the financial support conditions were issued inspiring deeper interest and consolidation of local communities.

The Municipality initiated a co-operation of municipal and private funds. This was a new activity in capital city’s heritage preservation management which was co-ordinated by Vilnius Old Town Renewal Agency. The offered municipal support was of following extent:

– up to 50% of the renewal costs for roof renovation, street facades and building surroundings

– up to 40% of the renewal costs for inner yard facades and landscaping.

There were totally 212 applications for the support presented, and 60 objects were given relevant financial support of 596 648 Eur (in total).

2015 – 2019 the financial support was allocated mostly for the renewal of balconies and decorative elements in a critical physical state. 688 000 Eur were allocated in total for 52 selected buildings; and 297 275 Eur in 2020 for 9 buildings.

Heritage education for children and youth

Following the recommendation of the UNESCO World Heritage Centre, the Agency set up the Information Centre in 2000. One of the main activities of the Information Centre is heritage education for children and youth. The outstanding universal value of Vilnius Historic Centre is presented in schools and children’s summer camps, during free lectures, educational tours and various festivals of the city.

One of the top priorities of the Agency‘s Information Centre is cooperation with school communities. Number of years the specialists of the Vilnius Old Town Renewal Agency have been giving free lectures to teachers and students about UNESCO World Heritage Sites. This initiative aims to stimulate greater interest of young people in the values of Vilnius Old Town, ways of heritage preservation, restoration and adaptation to new needs. The Agency also organizes free educational tours for students in Vilnius Old Town. Both lectures and tours present the outstanding universal value of Vilnius Historic Centre, its structure, urban development, most important architectural monuments, multinational communities. Lithuanian capital is compared with other neighbouring world heritage cities: Riga, Tallinn, Warsaw and Cracow.

Heritage events for the whole family

The Agency together with the Fine Crafts Association of Vilnius organizes The European Artistic Crafts Days (EACD) every spring. During this event Vilnius residents and guests are invited to visit craftsmen’s workshops and participate in craft demonstrations free of charge. Also researchers of ancient crafts, historians and archaeologists give lectures, and various exhibitions are organized during EACD.

St. Bartholomew’s Fair is taking place in Vilnius every August since 2012. The Agency is one of the organizers of this event. The Bartholomew’s Fair has been known to Vilnius residents since the 17th century. The revived historical fair presents the crafts and arts traditions of the city in the late Middle Ages and the Renaissance. This event is a valuable intangible cultural heritage, which significantly strengthens the cultural content and importance of the historical center of Vilnius – a UNESCO World Heritage Site.

European Heritage Days are held in Lithuania every year, as in many European countries. The Agency presents various educations at this event. In 2020 during the European Heritage Days the Agency issued a publication “The Patrimonito in Vilnius Old Town” for children aged 7-12 (with the support of the Department of Cultural Heritage under the Ministry of Culture). Patrimonito means ‘small heritage’ in Spanish and the character represents a young heritage guardian. Patrimonito has been widely adopted as the international mascot of the World Heritage Education Programme.

The Agency has also published more publications for children and youth. Some of the most successful examples were “What do you know about ancient crafts?” And “Historical capitals of Lithuania: Kernavė, Trakai, Vilnius”.

Seeing the lack of UNESCO World Heritage publications for children and youth in Lithuania, the Agency plans to publish a publication for senior students in the near future, presenting the stages of Vilnius Old Town historical development, the most valuable surviving authentic urban structural elements, buildings and their ensembles and their management over the last three decades. The new experience and achievements of Vilnius heritage protection in the publication would be compared with similar ones in Tallinn and Riga.

In 2020 the pandemic slowed down and disrupted the activities of cultural institutions in Vilnius, as well as throughout Europe. Some institutions have closed, others have tried to switch to online services. During this period, the Agency suspended most of its educational activities, but continued to interact with schools and families on social networks. During the pandemic, the Agency, independently and in collaboration with partners, developed interesting virtual lessons about World Heritage. 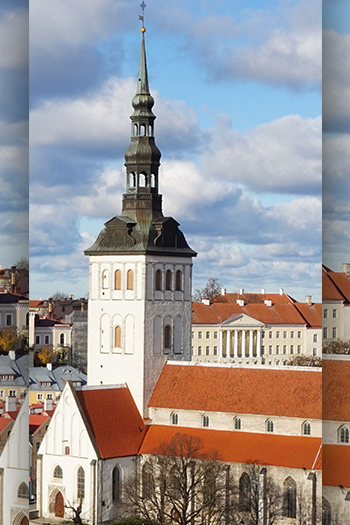 Citizens’ associations have traditionally been involved in processes concerning the preservation and popularization of the Old Town. A good example is the Youth Club „Kodulinn“ (Hometown), established in 1975 that holds regular meetings club‘s own house (Kodulinna Maja) and also organizes events promoting heritage protection.

For several years the school of the Collegium Educationis Revaliae has promoted appreciation of the cultural environment of the Old Town. The Collegium is now active all over the Latin Quarter, combining basic education with lessons on cultural heritage, arts and music, guided by the motto “There is no heritage without inheritors”.

Tallinn Old Town Society was established in 2010 as a non-profit organization that brings together the inhabitants of Old Town. It is actively promoting preservation and appreciation of the living environment of Old Town. The society is actively involved in shaping the short and long term objectives of maintaining Tallinn Old Town as a living environment.

In 1985, the tradition of celebrating the Heritage Conservation Month was initiated. It starts on International Heritage Conservation Day on April 18 and lasts until International Museum Day on May 18. The focus of the Heritage Conservation Month has gradually moved towards popularizing and preserving cultural heritage, and each year the City of Tallinn plays an active role in organizing events that serve this purpose. Other long-lived cultural events with a focus on Tallinn Old Town are the Old Town Days (held since 1982) and Medieval Days (since 1999), both with the aim of reviving the cultural traditions of Hanseatic times as well as creating new ones.

The networks of World Heritage Sites as well as several institutions that don’t belong to the network play a significant role in popularizing Old Town on an international level. The Organization of World Heritage Cities was established in 1993; Tallinn is one of its 238 member-cities. Estonia is also associated with prominent international heritage protection organizations like ICOMOS and ICCROM (International Centre for the Study of the Preservation and Restoration of Cultural Property).

The principles of ICOMOS (International Council on Monuments and Sites), the Advisory Body of UNESCO, are represented in Estonia by the Non-profit Organization ICOMOS Estonia. It consists of experts and scientists working in the field of heritage conservation and restoration, whose main aim is to raise awareness of immovable monuments in Estonia, to conserve them and integrate them into the contemporary environment.

From the archaeological viewpoint it is essential to inform the owners of monuments in due time and to communicate with real estate developers, but also to supervise the works executed on the monument. The restoration of buildings in Old Town is nowadays also influenced by ownership relations and financial issues. As a result of the privatization process launched in 1990’s most of the buildings in Old Town are privately owned, which has made it complicated to preserve and display cultural heritage of public interest authentically.

One of the concerns of Old Town is the so-called ghost palaces, i.e. empty buildings, the renovation of which is tangled in court disputes. The proprietor of the building can be forced to do minor repairs in case of damage, but a full restoration in these cases requires a judicial decision. Due to legislation and the form of ownership, the role of the public sector has in several cases been limited to advising, supporting and monitoring. Thus, there is the tradition in Tallinn already since 2003 to elect the best restored building (both in Old Town and outside it) once a year and to award its owners, architects and builders. The owners of monuments have received support in restoring historically valuable architectural details and in drawing up project documentation. The state has also assisted in marking the monuments.

In the process of conserving buildings it is vital to try and preserve the historical exterior as well as the interior layout as close to the original as possible. Preserving historically valuable architectural details is just as important, in Old Town it would be the limestone masonry of stone portals, stone pillars, candle – and wall niches. Many buildings still have their trapdoors and lifting beams for lifting up goods, beamed ceilings and various other details. The roofscape of Old Town is valuable and integral, clogging it up with antennae and unsuitable rooftop annexes should be avoided. The visibility of the buildings and their historical faҫades can occasionally be hindered by improper advertisements, terraces or other temporary structures. In order to avoid making mistakes in designing and setting up statues or other smaller works of art, it is important to have the approval of the advisory committee.

Private owners have the possibility to apply for financial support from the state and the local government for research and restoration. Over the years, the City Government of Tallinn has made large investments into buildings belonging to the city (Town Wall and its towers, bastions, schools, churches, administrative agencies, municipal museums, streets, parks, etc.). Since government buildings, several ministries and state-owned museums are also situated in Old Town, investments from state funds have also been made towards improving the state of repair of Old Town.

According to the real estate survey commissioned by Tallinn City Government in 2011, only a quarter of real estate in Old Town is now owned by the public sector (city 17%, state 11%). On the one hand, several buildings have been restored and a suitable function has been found for them in cooperation with the private sector. The renovation of some of the run-down buildings is only a matter of solving court disputes over ownership. On the other hand, the private sector dictates the functions of the premises they possess, which may not be suited for the World Heritage environment. As a long-term trend one could, for example, perceive a threat here of tourism-oriented business dominating over the living environment.

Tallinn Old Town is quite densely housed. According to the Registry of Buildings there are 579 buildings in Old Town. There are altogether 2,295 apartment ownerships in the 194 apartment buildings. Among these there are 1,744 dwellings (apartments) and 551 business premises (non-dwellings). The total area under apartments is 151,393 m², the area under business premises 75,792 m². Private persons own a quarter of the property in Old Town, the rest is in the hands of both private as well as state business ventures. A quarter of property is owned by the public sector (municipality, state, non-governmental institutions). Ca 33% of the total premises of whole buildings in Old Town is in public use, the largest percentage is used by state and municipal institutions (25 buildings), followed by educational institutions (19 buildings) and culture- and performance institutions (14 buildings).